When China responded to President Donald Trump’s trade war with an extra 25% tariff on U.S.-made cars in mid-2018, the move cut the number of vehicles exported from America by half.

China dropped the added levies for most of 2019 but is now threatening to bring them back as part of its latest escalation of the tit-for-tat with Trump. While American carmakers Ford Motor Co. and Tesla Inc. would suffer, a bigger blow would be felt by German companies that build Mercedes-Benz and BMW sport-utility vehicles at plants in Alabama and South Carolina.

“This puts the industry in a very difficult position,” said Alan Baum, an independent auto analyst in West Bloomfield, Michigan. “This could prompt a reaction from the U.S., which could mean more tariffs on parts from China. It makes it difficult for automakers to plan on where to invest.”

After the market closed on Friday, Trump tweeted out his response. He said he will raise tariffs already in effect on $250 billion of Chinese imports to 30% from 25% on Oct. 1 and tax the remaining $300 billion in imports at 15% instead of 10% starting Sept. 1. 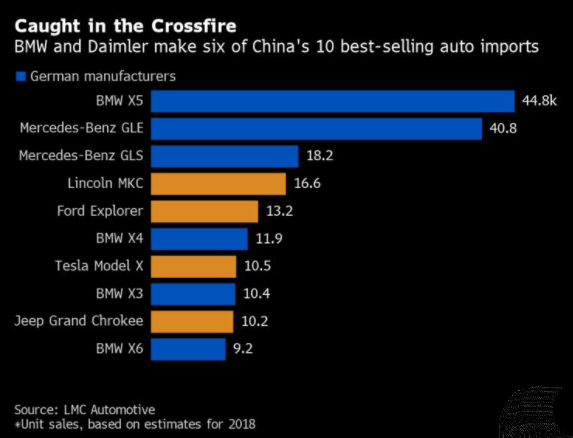 Together, BMW AG and Daimler AG sold six of the 10 most popular U.S. vehicles exported to China during 2018. The trade war cost BMW 300 million euros ($333 million) in 2018, and Mercedes parent Daimler was the first major global corporation to cut profit targets because of trade last year. Yet even companies such as General Motors Co. that produce locally most of the cars they sell in China could be hit by levies on auto parts and further retaliation measures.

Shares of BMW fell 3.2% to the lowest level in almost seven years on Friday, while Daimler declined 3.1%. Tesla, the most exposed U.S. manufacturer, slumped 4.8% in New York, and GM and Ford also dropped.

While uncertainty about trade barriers — including potential U.S. levies on imports from the European Union like high-margin Porsches — has eaten into carmaker valuations, the companies have had almost two years to adjust to the new reality. Here’s a rundown on their exposure to the new tariffs and what they’re doing to mitigate the impact.

BMW
BMW in 2018 calculated a full year of tariffs between the U.S. and China would cost it about 600 million euros, though the countries came to an agreement shortly before that scenario was realized. The company makes its entry-level X1 SUV locally through a joint venture with Brilliance China Automotive Holdings Ltd. and has plans to increase its ownership to 75% by 2022.

The Munich-based carmaker also moved local production of its X3 SUV to China in May 2018, around the time the first round of retaliatory Chinese tariffs kicked in. Its best seller, the X5, is shipped in ready-to-assemble kits to Thailand before continuing on to China, avoiding any new penalties on U.S. imports. Most exposed is the Spartanburg-made X7, BMW’s largest, which has sold well in China.

Between 5% and 10% of group earnings would be wiped out over a full year, Juergen Pieper, an analyst at Bankhaus Metzler, said in an email. “A second-half recovery would be difficult to achieve.”

Daimler
Mercedes-Benz never quantified the earnings impact of the trade war and has faced a range of other problems, including a regulatory crackdown on its diesel cars in Europe and production disruption affecting its popular GLE SUV. It has said additional tariffs may prompt it to consider assembling some SUVs in Southeast Asia, as BMW does with the X5, for export into China.

The carmaker will start local production of its first all-electric SUV, dubbed EQC, in China at the end of this year.

Tesla
Tesla exports its pricey Model S sedan and Model X sport-utility-vehicle to China, along with the lower-priced Model 3. About 14% of its global output in the first half was sold there, according to Credit Suisse analyst Dan Levy.

Chief Executive Officer Elon Musk has high hopes for the Model 3 in China and has been focused on getting the company’s plant in Shanghai running by the end of this year. The Chinese tariffs are due to take effect in December, so the impact will depend on how quickly the plant starts production. 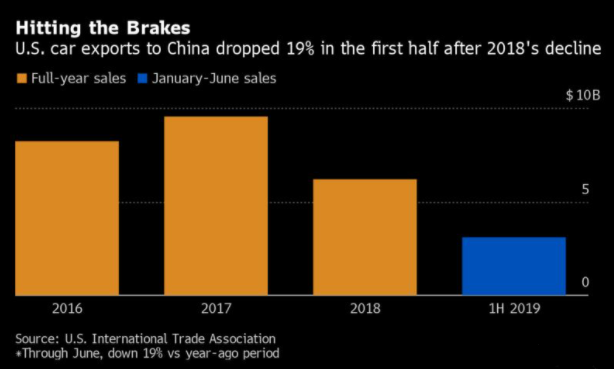 Ford
Ford expects China to become Lincoln’s biggest market, surpassing the U.S. over next few years. Almost 10% of its sales in China were imported, the vast bulk of them from the U.S. — including top sellers such as the Mustang sports car and F-150 Raptor pickup truck. Three quarters of Ford’s exports to China are Lincoln models, and while all are now made in North America, local production of the Corsair small SUV will begin late this year.

“We encourage the U.S. and China to find a near-term resolution on remaining issues through continued negotiations. It is essential for these two important economies to work together to advance balanced and fair trade,” the company said Friday after the new tariffs were announced.

Avoiding levies is a key reason Lincoln plans eventually to build all its models in China, except for the Navigator SUV, which doesn’t sell in large enough numbers. “We see China as ground zero for Lincoln, given the size of the market and how well the brand has been received,” Bob Shanks, Ford’s then-Chief Financial Official, said in May.

GM
The U.S. automaker would have little exposure to the new tariffs. GM does send some American-made parts to China, but the impact is minimal, according to Levy, the Credit Suisse analyst.

The bigger risk to GM and companies with few exports to China is that there could be greater retaliation against their operations in China, or the Trump administration could add tariffs on parts made in China for U.S. vehicles, said Baum, the independent auto analyst.

Review on your broker can be placed here. To buy this placement just press button below.
Buy place
New views

Capartners
4.0 rating
is a company with many investment choices.
Recent Comments
Recent News

Who Will Lead the WTO and Help It Avoid Collapse?
2 years ago

Where to Invest Now: Advice from Top Strategists
2 years ago

Risk Disclosure: All materials presented on the site news, analyzes, quotes, forecasts, reviews, comments and others about the activities of Forex dealers, including graphic ones posted by the site or partners are for informational purposes only, and are not guidelines for making any conclusion of transactions with Forex dealers or the use of other financial instruments. The site is not responsible for the accuracy of the information contained on the site, as well as the loss of funds as a result of you relying on analytical reviews and signals published on the site. The site is not a broker, and therefore does not accept money for Forex trading. When starting to work in the Forex market, make sure that you understand the risks involved in trading using leverage and that you have a sufficient level of training. The possibility exists that you could sustain a loss of some or all of your initial investment and therefore you should not invest money that you cannot afford to lose. We advise you to read the Terms and Conditions very scrupulously to protect yourself and to know what may happen. The market changes rapidly due to a variety of reasons e.g. political or financial issues in the world. Trade only with trusted brokers. Before you start trading find all the necessary information about risks and costs, take into account your level of experience, the costs you can afford to lose, the knowledge of the process itself.

54-87% of retail CFD accounts lose money. Based on 69 brokers who display this data.